Simon Naud | Owner of Vignoble La Bauge in Brigham in the municipality of Brome-Missisquoi.

Simon Naud is a passionate, creative winemaker who never ceases to amaze with his knowledge! Simon decided to become a winemaker by gradually discovering his passion for wine while growing up in a vineyard.

Having owned a dairy farm for almost 30 years, his parents decided to pursue a whole new adventure: planting a vineyard and making wine! This is how, in 1986, the Vignoble La Bauge was created, making it one of the oldest vineyards in Quebec.

In the early 1990s, Simon finished his studies at St-Hyacinthe Institute of Technology and officially became co-owner of the family business. Simon Naud quickly took his place place in the winemaking business, building up on producing very successful wines. With one of his first vintages, he won the “Golden Cup” at the Nations Cup in Quebec in 1999. Since then, he has received several awards and distinctions for the high quality of his wines.

A leader recognized for his knowledge

In 2002, Simon was also instrumental in setting up the first wine route in Quebec, in Brome-Missisquoi. This concept then took off in various regions of Quebec, each with its unique features, landscapes and local flavour, offering wine lovers the opportunity to discover local products.

A winemaker and its sheep!

Simon has had an early start with the love of nature and animals. The sheep that the family keeps on the land of Vignoble la Bauge are very popular during the tours, but they are also essential for the preservation of the vineyard ecosystem. 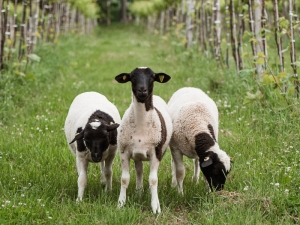 It all started with the breeding of boars on the family land, Simon had the idea of ​​working hand in hand with the animals. Wild boars, sheep, ducks, swallows, all helped reduce the use of machinery and limit the intrusion of certain insects into the fields.

Pursuing his desire to work with nature, Simon turned to organic processes in 2016. He first started by planting a few plots of organic vines which were obviously fenced to welcome sheep which help maintain the grazing vines! This approach made it possible to reduce the time and energy required to cut the grass – with a 100% eco-friendly solution – while having a good fertilizer available…

Simon Naud continues to contribute to the development of the Quebec wine industry by creating exceptional wines and hosting a tourist destination with a unique draw – wine and connection to nature.

Taste the products of the Vignoble La Bauge

You can order wines directly from the vineyard at any time and home delivery is possible for all customers! You can also find the wines in several large grocery stores (IGA and Metro) and in local delicatessen store.

Discover the wines of the La Bauge vineyard